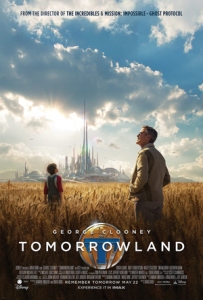 Having read mixed reviews, I waited until Tomorrowland came out on cheaper streaming services. Directed and mostly written by Brad Bird, auteur of brilliant work like Iron Giant and The Incredibles, the previews looked promising — a story about the shiny visions of the technological future we had as kids in the 1960s, and a world where they actually happened.

The first two-thirds of the movie are great — the young heroine gets into trouble for trying to save a NASA launchpad from demolition. The failure of dreams and a rising tide of pessimism have left the world obsessed by dark visions of dystopic futures. Then she finds a pin which, when touched, transports her to Tomorrowland, which riffs on Walt Disney’s vision enshrined in the eponymous part of Disneyland. There are several Disney in-jokes, like one robot’s insistence that she’s “audio-animatronic,” Disney’s term for lifelike automatons.

Tomorrowland is congruent with Earth but in another dimension, and was founded by Tesla, Edison, Jules Verne, Gustave Eiffel, and similar geniuses as a place for the best and brightest scientists and artists to work on dreams of the future unlimited by politics and hidebound Earth thinking.

The heroine meets Frank (George Clooney) as an older scientific genius who was brought to Tomorrowland as a child, but then was exiled for inventing a machine to predict the future, which foretold of disaster to come. They are chased by killer robots to Tomorrowland itself, which is decaying and abandoned. The apparent dictator of Tomorrowland, played well by Hugh Laurie, is the only Tomorrowland resident we meet who isn’t a robot, and he no longer believes humanity deserves to be saved. The explanation for the decline of Tomorrowland is never given, but a thriving high-tech colony in 1964 becomes a dystopia in 2015 with a dictator who ruthlessly kills anyone who gets in his way. The movie shows its deep schizophrenia here — having satirized today’s obsession with dystopias and pessimism, it doesn’t even bother to explain why a settlement founded on idealism should turn so sour. The one hint comes when dictator Nix tells Frank it was his fault for not believing. And later it’s suggested that the heroine’s refusal to give up can magically effect the probability of doomsday. So the woo factor a la “The Secret” appears, with the trite metaphor of the two wolves: “You have two wolves, one representing darkness and despair, the other light and hope. Which one lives? The one you feed.” So it’s all about attitude!

After much clanking plot with explosions, fights, chases, and other worn-out devices, the bad machine that is creating negative consciousness on Earth is destroyed, and the future looks more hopeful. Nix admits he was intentionally beaming negative thoughts at Earth, expecting they would motivate people to fix the problems leading to Doomsday, but they just reveled in despair and refused to sacrifice convenience. Ahem?

The vision is inspiring. But the end is chilling — bad machine destroyed and dictator killed, a new corps of fresh-faced young robots will recruit the artists and scientists of the future to persuade others to apply creativity to fix problems. This bit looks like an Apple commercial, with its gauzily sentimental multicultural recruitees.

The laundry list of problems shown as destroying the Earth includes global warming (the melting glaciers and flooding coastal regions are shown), nuclear war, and political unrest. Putting the clues together, the solution is found by persuading people to sacrifice comfort to do what is necessary as instructed by the best and brightest. So a kind of techno-fascism will save the planet! This has little of the optimism we associate with Disney, and a lot of today’s politicized environmentalism.

The script loses faith in the audience and resorts to the same old villains, fights, and chases to keep their interest, when the material is fascinating enough without demonizing anyone. As a result, instead of exploring the issues in depth, most screen time is action. It might as well be a Transformers movie for most of its running time.

There’s a parallel with the book I’m working on now, Shrivers: The Substrate Wars 3. Near the end, a “Galactic Tribunal” similar to the one in Heinlein’s Have Space Suit–Will Travel is deciding whether to destroy humanity, or allow it to join the community of intelligences living in the computational substrate of the universe. The young woman pleading our case ends her testimony with this:

“I just have one more thing to say.” Kat didn’t know where this was coming from, but she had to speak. Aurora looked alarmed.

“You sit in judgment of us. If you applied the same standards to the oldest among you, how many would pass? How many are still making an important contribution to knowledge? I’ve experienced each of your lives — you were driven, reaching for the stars, and working to advance your people. But how many of the First are lost in some virtual dreamland, using cell space for nothing but fantasies? And you judge other civilizations and have them murdered in their infancy so that you might never be inconvenienced or have to give one moment’s thought to the outer universe. You don’t want to think of the cost — you kill the new life you don’t want to know about and can’t be bothered to assist, while more and more of you do nothing.”

Quog’s eyebrows had gone up. “Do go on.”

“If I am ever uploaded,” Kat said, “I’m going to work. I’m going to find a way to bring every civilization forward. It can’t be that there’s just not enough space for everyone. There must be a way to expand it.”