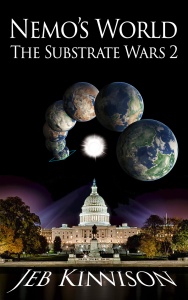 I go to IndieReader for formal reviews, since I’ve discovered legacy reviewers like Kirkus apply ideological prejudice to their reviews — notably for Bad Boyfriends, where the reviewer downgraded the book because I mentioned the need for children raised with expectations of entitlement to adjust to reality to find a true partnership. IndieReader does a much better job of fairly reviewing indie and small publisher works.

NEMO’S WORLD is the second installment in Jeb Kinnison’s The Substrate Wars series. The action takes place in the near future where the United States has become a one-party oligarchy opposed by a group of rebel scientists and humanity is poised to destroy itself in the name of “security.” Fortunately, a group of idealistic scientists and engineers use their intelligence to address the damage and offer a true taste of freedom to humanity.

The scientists, primarily quantum physicists, possess breakthrough technology that allows them to travel across vast distances as well as monitor others remotely through their gateway technology. The superpowers, especially the USA and China, are trying to capture the technology and the leaders of the group so they can dominate the planet. Justin Smith, a rebel leader, becomes the face of the opposition and the Americans (as well as other powers) are trying desperately to capture him. Fortunately, the rebels used their gateway technology to escape to an earthlike planet 50 light years away. The chief scientist of the rebel group, Steve Duong, used the gateways to capture every nuclear warhead on the planet to warn the superpowers to stand down and negotiate a lasting peace for their populations. The war goes on as the US and China try to duplicate the technology and end the rebellion.

The science is accurate and is footnoted so the reader can delve into the actual science behind the plot. There is conflict in the plot, especially in raids from US Seals and Islamic terrorists but the resolution is tempered with justice. NEMO’S WORLD does not have the melodrama of a space opera or of bloody fanged aliens attempting to wipe out humanity. It is a thought-provoking plot where each scientific breakthrough is analyzed for its effect on humanity and even the forces opposing the rebels rationally sort out their plans to capture the technology. The action is set against a background of intelligent discourse ranging from the effects of the technology on third-world farmers to the noosphere, the realm of human thought, and how it is affected by artificial intelligence. Even the title, NEMO’s WORLD, is a translation from Latin meaning “nobody’s world”, a reference to the loss of hegemony by the world powers. This is the level of discourse in the novel from its first pages. The book leaves several topics open, like the possibility of alien contact and the development of AI, but these seem to be hooks to be used for later in the series.

Good science fiction is usually about humanity rather than deep space or death rays. NEMO’S WORLD is well-written science fiction that harkens back to the golden age of Heinlein and Asimov.

If you haven’t read the first in the series, Red Queen: The Substrate Wars 1, it’s best to start there.