I recently read and reviewed Virginia Postrel’s excellent The Power of Glamour, in which she touches on the issues of positive and negative uses of glamour in persuasion — advertising, propaganda, entertainment and branding. She is primarily interested in defining glamour and determining how it is produced by the careful editing of reality to cast a spell on susceptible audiences that has the power to motivate actions — from purchases, to career choices, and even emigration and warfare.

I recently wrote my own book, Bad Boyfriends, which addresses an analogous phenomenon — limerence, or being “in love,” a powerful neurochemical-emotional state that also casts a spell over the observer.

Of course the typical glamours of fashion photography, Hollywood star photographs, or cinema adventures are today so common that most observers are largely immune to their effects — while caught in the spell and enjoying temporary immersion in it, they know it is neither real nor readily attainable. But the effect of both glamour and limerence depends on the susceptibility of the observer, and the construction of a dream of the future self by either glamorous presentations or a few sightings and encounters with the object of limerence can become obsessive for the observer who is starving for that dream.

And as with glamour, age and experience reduce limerence’s power. While a young person might give up his home and job to pursue either a dream career or the fantasy mate, the older and wiser have seen this play before, and know how to enjoy the fantasy and pursue it a little while not irrationally sacrificing the advantages of their current life.

Postrel writes, “Glamour fuels dissatisfaction with the here and now, even as it makes present difficulties easier to endure by suggesting the existence of better alternatives…. By tendering the promise of escape and transformation, glamour feeds on both hope and hardship.” So one’s already drab, boring life looks even worse by comparison, if you are say a German young man around 1900 reading the then-popular Western pulp novels (like those of Karl May); but then you start to obsess over your plan to escape to the Klondike to strike it rich in the new gold rush, and you have goal to work toward and a plan that fills your heart with joy in anticipation. The writer Karl May had never visited the West or met a cowboy, but he still spun an illusion strong enough to motivate thousands.

Similarly, limerence has launched its victims toward both achievement and destruction, sometimes both. Postrel cites Helen of Troy as one of the earliest documented cases of glamour, and it could be said that her power was to induce limerence in nearly everyone who observed her, leading to her kidnapping, war, and the destruction of Troy.

So we come to the question that every sensitive person whose job is to persuade via glamour in advertising or marketing considers: is what I am doing moral? When I create a glamour, I am setting a trap for the susceptible members of my audience that will create inside their heads a persuasive and persistent model of a future they dream of being part of. As always in persuasion, to feel that it is moral one must have a sense that on the whole you are doing those who are persuaded a favor; that they will be better off having purchased that new BMW or party dress, or taking up a career in the Navy.

Critics of persuasion by glamour can cite many examples where slick advertising and presentations caused victims to do harm to themselves — as mild as buying something they did not need and did not use, in which case they traded some money for a brief sense of pleasure in the having of the object. Or as serious as the spell cast over many of the German people by the Nazis using filmed propaganda, with revived pseudoclassical symbols and theories of Aryan mysticism, to justify their expansion and the demonization of “subhumans.”

Similarly, Sigmund Freud’s nephew, Edward Bernays, the “father of PR,” (and father of my Harvard fiction writing teacher!), began the use of mass market persuasion techniques that included what today would be called “viral marketing,” by creating images and narratives designed to be picked up by the mass media and so persuade millions through a combination of advertising and free publicity. His “Torches of Freedom” campaign, which in hindsight seems evil, used a staged demonstration of actresses pretending to be freedom-fighting women demanding the freedom to smoke cigarettes. The National Post comments:

On Easter Sunday, 1929, about a dozen female socialites marched along Manhattan’s Fifth Avenue, ostentatiously smoking cigarettes. Their mission: to fight the stigma against public smoking for women. According to The New York Times, the women insisted that they weren’t holding mere cigarettes but “torches of freedom.”

The march was choreographed by Vienna-born PR pioneer Edward Bernays, then on retainer with the American Tobacco Company. The story is vintage Bernays: a quintessential example of his knack for manipulating public opinion with evocative images and phrases. Bernays had learned from his uncle, Sigmund Freud, that people were basically irrational, driven by instincts. The enterprising nephew unabashedly exploited this insight, appealing to emotions and not intellect whether he was selling Ivory Soap or Calvin Coolidge. The approach revolutionized consumer culture.

Bernays influenced political communication, too. He was dismayed to learn that his 1923 book, Crystallizing Public Opinion, was in Nazi propagandist Joseph Goebbels’ bookcase. Still, in another context, Bernays would likely have approved of Goebbels’ claim, that “in the long run basic results in influencing public opinion will be achieved only by the man who is able to reduce problems to the simplest terms and who has the courage to keep forever repeating them in this simplified form, despite the objections of the intellectuals.” Both men knew well: The public opinion battlefield is the heart, not the head. 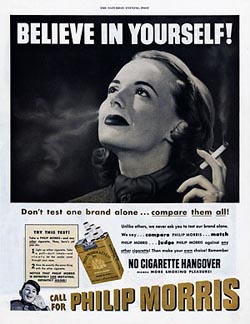 If we are thinking morally, this is usually where we get off the persuasion bus. Let’s suppose that we believe what we want to persuade the public to do will be good for them, on the whole; but we are going to elide the details that might “complicate” their evaluation of our proposals, leaving out the real-life problems that may come up, and make simplified assertions that anyone who understands the situation well will know cannot possibly be the whole truth.

By a series of steps it is possible to convince an otherwise well-meaning and honest person (or entire political party) that lying over and over again to persuade people to give you permission to spend a trillion dollars on a complex program (too complex, it turns out, to actually be executed well or as planned) that benefits a few people a lot, somewhat more people a little, and harms the balance, sometimes significantly. A billion dollars was spent on duplicative software, mostly wasted; hundreds of millions more on advertising which also left out any significant problems the plan might create for some; and hundreds of millions of dollars more on foot soldiers to promote and assist (and remind the beneficiaries who gave them the gift.) The President was an unusually glamourous figure and supported by both Hollywood and the glamour of rhetoric and dream-spinning. But alas, behind the glamour there was a lack of competence in execution, despite good intentions.

Destruction comes to those who believe the glamour they have spun around themselves. To make this a nonpartisan roasting, note the Bush administration in Iraq, who very successfully used the US’ competent and overwhelming military to bring down Saddam Hussein in only a few days with the least loss of life and property of any major war in history. Hubris was achieved shortly thereafter, when the occupation dismantled existing police and government functions to (they thought) create a brand new government and society based on US models of representative government and modern freedoms. The resulting chaos and civil war more than wiped out any advantage gained for either the US or the Iraqi people. Good intentions did not magically create good results.

The greater the risk being taken with the audience’s lives or fortunes, the less justifiable is any misleading persuasive technique, including glamour. We should always be asking, “What if I am wrong? What is the downside of what I want them to do if they are not successful? How painful and destructive is disillusionment from the illusion I am trying to create?”

This article from MarketingProfs discusses the new world of marketing where there are so many sources of information and eager writers among the public that creation of lying spin is much harder (despite the example of Obamacare, which was enabled by a certain uniformity of background — and lack of economic knowledge — of most media reporters.) To quote:

Today, people who want to make great stories can use technology to influence public perception, rather than shape public perception around a lie. Think of it like this: Consumers no longer buy out of a fear of not having something; they buy because the product has the potential to enhance their personal story. Progressive marketing companies such as SHIFT Communications and TGPR talk more about how we make and share real stories—rather than “tell” them.

Dreams of being beautiful and admired (fashion, cosmetics, jewelry…) or powerful, wealthy, and admired (luxury cars, watches, ski houses in Aspen…), competent and skilled and admired (Olympic athletes, dancers, musicians…) are all worthy. One question to ask when you are spinning up a glamour aimed at young people is: how many of them can actually achieve it? Say you have written a script about a ghetto kid who takes up basketball and makes it to the big leagues, suffers one crisis when he takes his new position and love interest for granted, and (heartwarmingly) learns to wisely value those who care for him. What happens to the kids who focus on basketball and neglect other things? While we know most will be disappointed, we also know any kind of focus on achievement is better than no focus. What are the offramps along the way for those who fail to get the brass ring? Going to a good school on a scholarship gives the kid a chance to pick up other skills and find other dreams. Being on a team and showing up regularly for practice teaches the most important skills of holding any job.

It’s clear that people need their dreams, and glamour can lead them in directions they did not expect or know of, but were ready for. The mass marketing of glamour has accelerated the dissatisfaction with what is, and the motivation to create the “what ifs” we call progress. The increasing availability of information uncontrolled by one or a few sources means the future is being created by a glamour with more realism, tucked just out of sight but known to be there. But it can still excite the mind and make the heart beat faster, and move the dreamer to take the chance on the dream.

For more on pop culture: